Alexandre Farto aka Vhils has been involved once again in a major art exhibition in London. The show was only live for 5 days, being over by now, but Lazarides managed to get many major artists inside like Mark Jenkins, Antony Micallef, David Choe, Conor Harrington and many many more. Pics inside 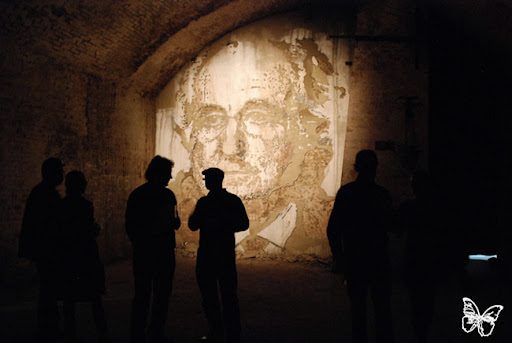 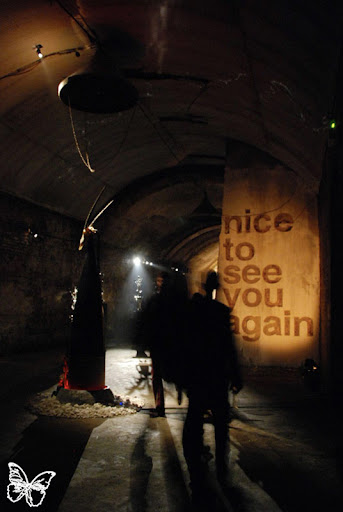 All pics kindly given from S. Butterfly. Check her full set from the show here

Lazarides Gallery is delighted to announce their upcoming collaboration with The Old Vic Tunnels. Staged within the recently discovered labyrinth beneath London’s Waterloo station, ‘Hell’s Half Acre’ will be a ground-breaking series of installations launching 12th October 2010. Bringing the vision of Steve Lazarides to one of London’s most arresting performance spaces, the maze of tunnels will be converted into a large-scale evocation of Dante’s literary masterpiece, Inferno. Visitors will explore the nine circles of Hell through the contributions of artists including: George Osodi, Antony Micallef, Polly Morgan, Jonathan Yeo, Conor Harrington, Christian Lemmerz, Vhils, Paul Insect, Mark Jenkins, Boogie, David Choe, Doug Foster, Zak Ové, Todd James, Ian Francis and many more…

Artists will provide their own interpretation of hell with freedom to reference both Purgatorio and Paradiso from the trilogy of The Divine Comedy. Through the curatorial direction, interaction with the exhibited works—paintings, sculptures, video pieces, performance and mixed media installation—is encouraged and part of this thrilling multi-sensory experience. Highlights of the exhibition include for the very first time 3-dimensional installations by Conor Harrington and Jonathan Yeo, a new exclusively commissioned film by Todd James/ REAS, the powerfully chilling photographs of George Osodi and Boogie, with a surprise finale by Paul Insect.

An event happening in Vila Franca de Xira, but which I can’t seem to find much information on it. Flyer inside.