Jucapinga who’s moved to London in the past year, will have a new show opening in February, thanks to the curatorial project Plasticina, also based in London. Expect some teaser pics closer to the date, and a hell of a show by the day. Flyer and info inside. 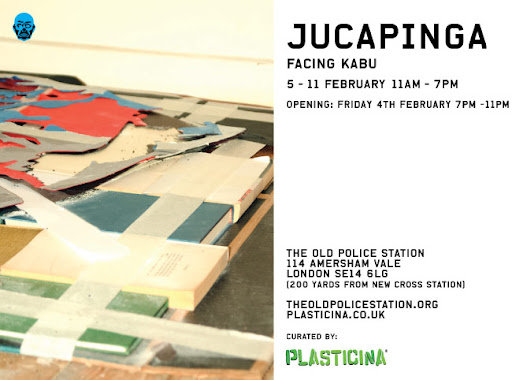 1940’s and London is the Worlds criminal Utopia.

Vasily is the Boss of the Organisation that for the last 6 years has been flooding the Capital’s streets
with violent assaults, kidnaps, drugs, and murderous vendettas. The ethnic and cultural diversity
of KABU, Vereschagin’s crime family, made them a lethal warfare instrument. The combination of
Russian perseverance, British severity, Cape Verdean cunningness and Portuguese bravery were
perfect ingredients for an explosive outcome. All efforts of the Police to stop this organization were
unsuccessful…

However, in Scotland Yard’s headquarters, a new investigation was being formed by mastermind
detective Dominic Sobiesky and his deputy Carlos Fultz in order to finally put an end to KABU’s rule
over the city…

A free state archipelago that still faces social and economic adversities caused by the lack of natural
resources and the migration boom that succeeded the colonial wars.

The title is ‘Facing Kabu’ because the foundations and imagination needed to create fiction requires
knowledge drawn from root level. Kabu Verde is a constant presence in the way Jucapinga works and
lives.

In this exhibition the relationship between good and evil, crime and order is presented sequentially
and limited by frames.
The question is: where does good start and evil end?

Born in Portugal to Cape Verdean parents, Jucapinga presents his work in London for the first time.

His true passion has always resided in creating characters, illustrating them and using them as
compositions in fiction. His influences are firmly connected with his roots, background and research
from the street culture where he grew up, João Abel Manta’s brush strokes, Sebastião Rodrigues’
graphic designs, Vasily Vereschagin’s strong-message war paintings and the revolutionary inspiration
of Amilcar Cabral. All this comes to life with the warm colours he uses and the ‘cut and paste’
technique which relies on simple but effective materials.

I’ve been following on Pedro Campiche akaCorleone‘s work for some time now. He just launched a hell of a video, showcasing his studio, methods…